At the Concorde event on 25th November 2014, at the Woking Photographic Society, two of our members were awarded a 10 for their prints — Martina Bennellick (Elephants and Kilimanjaro) and Marian Guess (Sea Pool). Congratulations go to both of them, and thanks to the other members whose prints were selected to represent the Club (Kevin Austin, Gary Weaving and David Wilkinson). 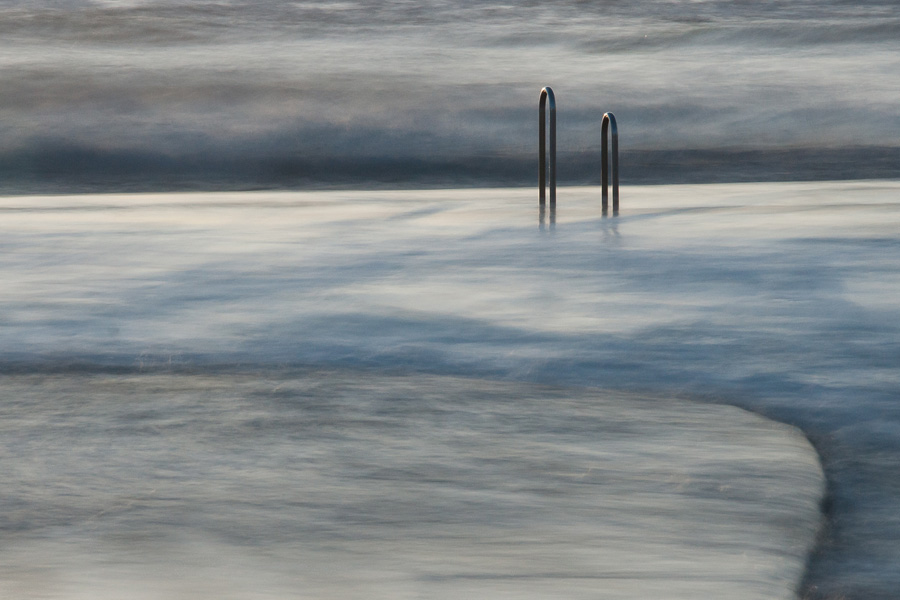 This is what inspired Marian to take this image:

“This picture was taken on a photo trip to Cornwall with Paul Foley. We were concentrating solidly on photographing rocks on north Cornish beaches when someone suggested we visit Bude Sea Pool for a change. Most of us didn’t know what this was but soon found that it was a swimming pool on the coast bounded on one side by rocks and the other sides by concrete retaining walls. It is on Summerleaze beach, Bude, and was constructed in the 1930s for all year round swimming. There is a valve which prevents it emptying as the tide goes out. At low tide the pool is like a millpond with mirror-like reflections of steps and rails. As the tide comes in the waves crash over the walls and then run back and the pool turns from a still pool to more like a washing machine. Most of us had never seen anything like it and it was quite spectacular and fascinating.

We were there in November and the weather on the first visit was overcast and the pictures came out rather black and white. We were so impressed by what we saw that we made a second visit as the sun went down one afternoon.

I wanted to keep the composition simple to emphasise the lines and colours and the movement of the water.”
TECHNICAL INFORMATION: I used a 10 stop filter to achieve a shutter speed of 4 seconds at f16 at ISO 500